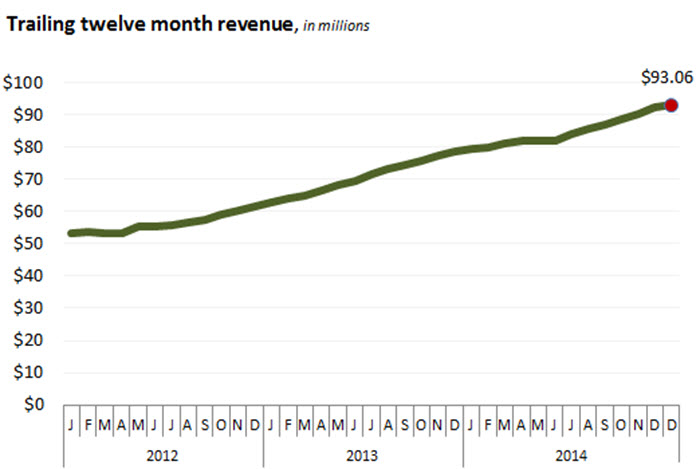 Many years ago, I was playing the role of retail sabermetrician (every financial and marketing analyst should be called this), and I was frustrated because I could not get a better understanding of my company’s top line. At the time, we were growing by leaps and bounds, both organically and through strategic acquisitions.

Sure, same-store-sales analysis is typically the go-to metric in retail, but I needed a better way of determining the overall impact on the P&L through this hyper growth. Comparing year-over-year financials was not helpful, nor could I easily grasp the trends on our capital structure over time that easily.

Accordingly, I started generating full 12-month profit and loss statements and comparing to the same 12 months a year earlier regardless of the month. And I conducted similar analysis for our rapidly changing capital structure looking for potential problems this growth could lead to.

Since then, I can tell you pretty quickly where a company is and where it’s headed by viewing a few pictures of the top line. I can probably tell you about the owner’s personality and the strength of the team as well. 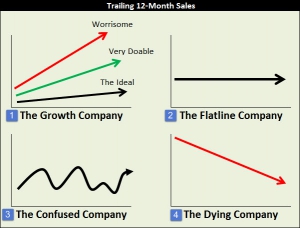 When a CEO wants to hire me, I first want to see the prior 72 months of sales. In a few seconds I can quickly plot the numbers to quickly gain insights. I build these graphs so that each point on the chart line equals sales for the current plus the previous eleven months.

One can plot the same data using trailing-three-months sales or some other period. I prefer using 12 months because most of my clients have some seasonality in their calendar years.

The end result is either a growing line, a flatline, an erratic line, or one that’s sloping downward.

There’s only one way to move these lines, and that’s through strategy. It can be good strategy, poor strategy, or just doing nothing.

So let’s look at each of these four lines.

The Growth Company – growth can be slow and steady or bumpy and tumultuous. I generally like somewhere in between. Expect to see hyper-growth in young start-ups. That’s the norm, or it should be.

The critical factor I want to know is whether the management team can truly support growth. A strong team is critical. But be prepared to swap out team members if the growth curves continue. Rarely can the same team managing a $10 million company possess the abilities in the $30 million growing company.

The other concern I have for these hyper-growth companies is their profitability. Operational excellence typically takes a back seat to strategic growth. So the capital structure needs to be adequate to support this growth.

Double-digit growth as high as 20 percent annually can still lead to profitable results. I’ve seen this in online or SaaS-based ventures because staff increases generally do not occur until a certain customer count is hit. When that next round of hiring occurs, the existing business can easily absorb the short-term spike in labor costs.

In all of these growth scenarios, the goal is to understand your cost of customer acquisition in big gulps. For example, for every $1 to $5 million increase in revenue, you should generally know the requirements in new fixed costs spending.

The Flatline Company – at first blush, these may seem like dull and boring businesses. Perhaps they are, but I have no problems with such entities.

But questions need to be asked. Are the owners committed to excellence in this organization? Are employees engaged? Is competition continually scoped? What threats could move our flatline downward?

In reality, the flatline company cannot be a flatliner forever. Costs go up. And revenues need to as well. But if this historical trend continues, cost containment is critical. There can be little room for error. Banking relationships need to be solid.

The Confused Company – I rarely encounter these businesses, but this pattern is not unusual in highly cyclical industries. I saw spikes in construction up to 2001, then a slow re-birth after 2004, and then back down in late 2008 and early 2009. Now the curve is moving upward for the specialty contractors I serve.

Confused? Maybe that’s an unfair word for these types of businesses. The key for these businesses is not to overspend during times of plenty and be building up cash reserves as business spikes. Keeping the core group of employees is difficult, but if cash reserves exist during the troughs, at least the best of the best can be retained.

While the growth curve of the confused company looks erratic over time, I’ve seen a few such curves with smaller jumps and drops when coaching small business owners that cannot make up their mind what they want to be when they grow up. This occurs when they cannot settle on one set strategy. These business owners have a difficult time with laser-like focus. Hence, the bumpy growth curve.

The Dying Company – I hate these curves, and I can say that with first-hand experience. When I see these curves, the first question is, “How long till we pull the plug?” Would you believe most of the owners think there is still hope in these situations?

Knowing when to say “when” may be the most difficult decision a business owner ever makes. Even more difficult than firing an employee or letting a long-time client go. I don’t see it that way. I see the decision as saying “Yes” to something else, a better opportunity.

There’s a reason we have turnaround experts available for these businesses. It’s because the best of these advisers know how to turn around a dying organization. Generally, turnarounds can occur when poor management has been the primary cause of poor performance. Fixing a dying customer base–that’s a different story and hard to overcome. 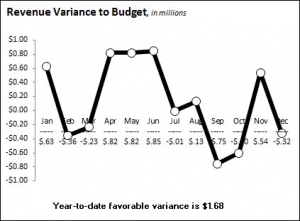 My best clients carefully plan their sales for the upcoming year each October or November. That’s not to say adjustments won’t be made along the way.

So I like to build a simple picture showing me 1) how often the sales team exceeds plan, and 2) what the year-to-date results are.

In short, I can tell a lot about a business when it does exactly what it planned on doing.

Missing budget two or three months is not necessarily a bad thing. The question becomes, “Why?”

In short, and as a rule, I want to see a business beating budget more than half the time out of the year. The goal is for those positive months to more than offset the months the company misses budget.

I find this snapshot marginally helpful, but additional insight is helpful when adding the average monthly sales for each year listed.

Similar to the trailing 12-month analysis mentioned above, I like comparing year-over-year numbers in three, six, nine, and 12-month time periods. Again, I’m looking for trends. While not shown here, I present the data in a table format.

This analysis is insightful as year-to-date numbers compared to the prior year may appear favorable, but when you start breaking down the time increments with varying time periods, the results may be telling a different story. Of course, this will show up in some of the other visuals already mentioned earlier.

Now we need to step away from the visuals for a minute and focus on raw data (although heat maps provide some residual value).

I was recently working on an acquisition of a small engineering and consulting firm, and my first analysis on the top line did not include the above. Instead, I was interested in the seller’s client base. First, I ranked his customer sales for the previous year as such:

Notice his top clients represent the majority of his revenues. My client and I were especially concerned about the longevity of client numbers 2 and 3.

Additionally, we quickly found average sales by customer had dropped along with his client count. This was extremely helpful in developing a purchase price for this firm which we heavily discounted.

Then, I looked at sales year-over-year looking for drops as shown below:

The analysis above is a must for non-retail businesses and should be part of the monthly sales analysis process. The analysis can be by line of business, product line, or any other way that sales can be easily segmented.

I wish I had a dollar for every sales report a client has handed me in the past. That sales report is typically nothing more than the P&L showing this year’s sales compared to a year earlier.

Sales analysis is not hard. The information above should only take 15 to 20 minutes to compile every month. Keep in mind we could have drilled down deeper using visual analytical tools like Tableau, but that’s a topic for another day.

The objective is not to repeat the above exactly in your organization. Sales analysis starts with a fundamental question, “What happened and why?” Then use a proper tool set to dictate how you want to structure your analysis to provide insight to your top line.

I hope you will excuse me; I need to analyze the following company for an upcoming meeting. 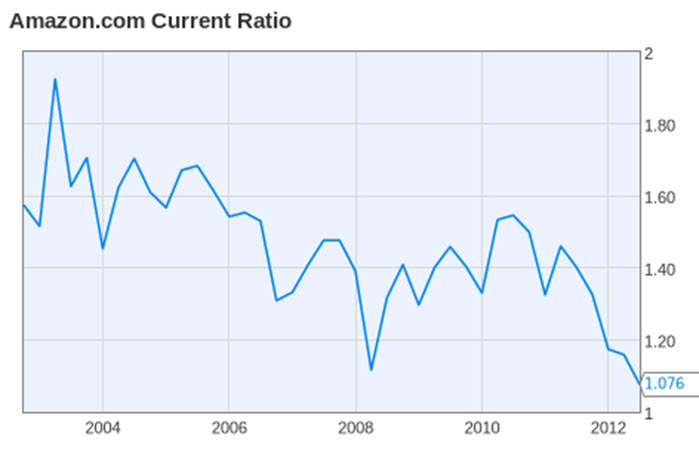 A few days ago, I received an e-mail from a growing online dashboard provider, and the topic was monitoring your current ratio. What boggled my mind was that their success… 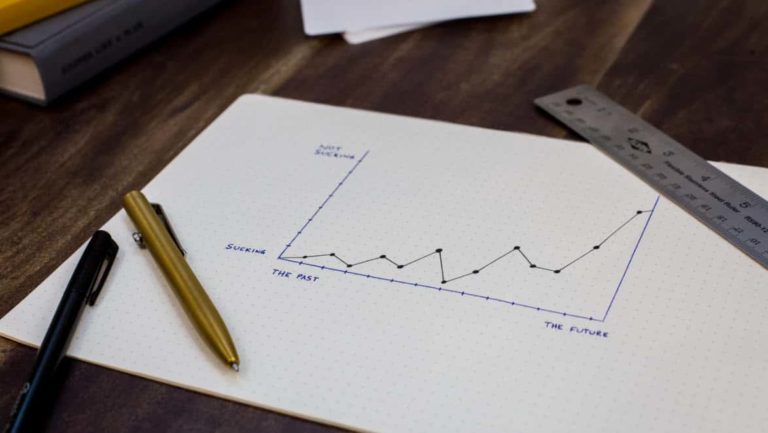 Financial fitness in any business requires a strong financial acumen. Unfortunately, most small business owners and CEOs are not MBAs nor have they been trained in financial reporting and analysis…. 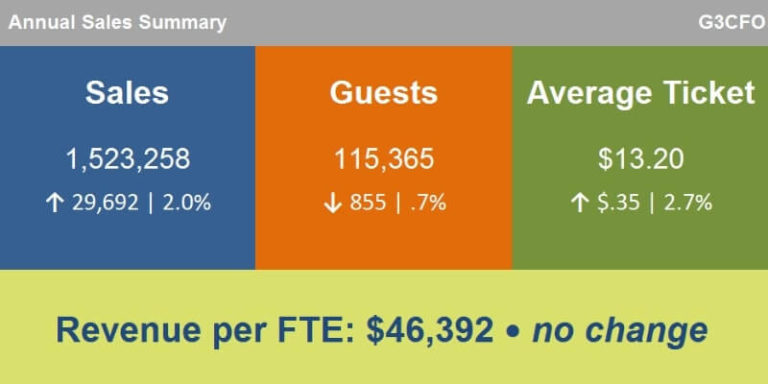 Periodically, I get a call or email from a client early in the month stating something like, “Hey Mark, we had an awesome month. What do you think?” CEOs love… 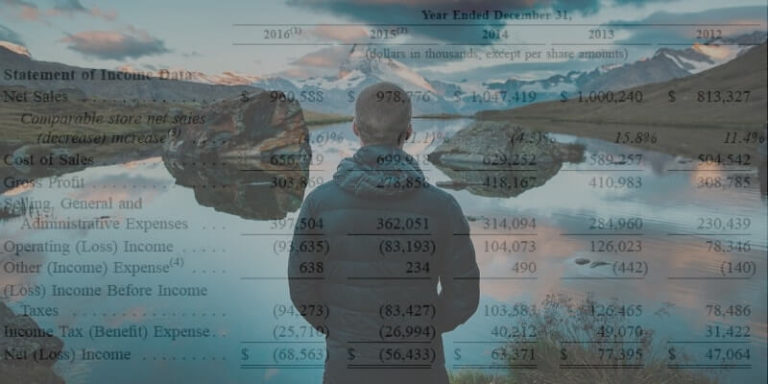 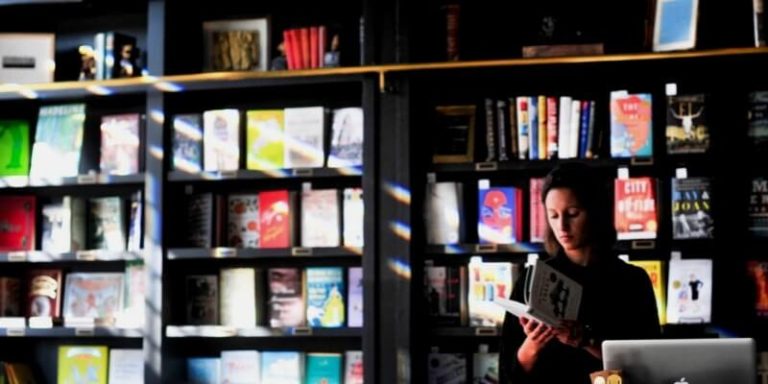 I used to look forward to walking through my local Barnes & Noble in Columbia, Missouri on a weekly basis. I could browse the book shelves for hours and easily… 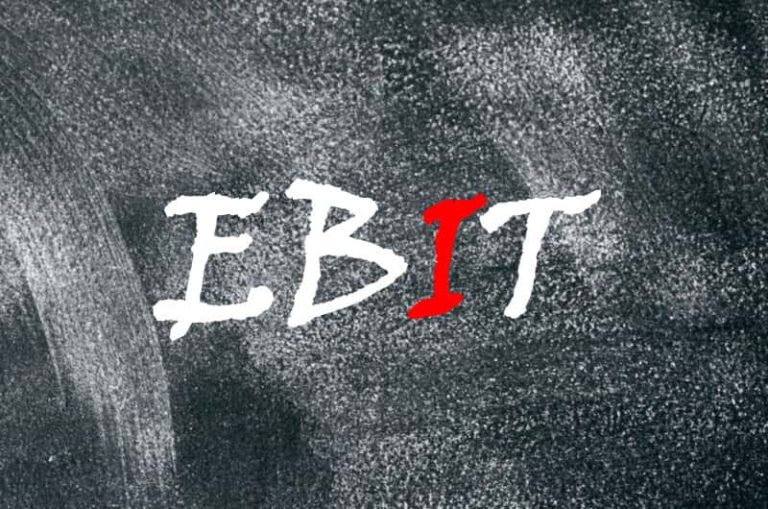 Several years ago, I added a new client to my portfolio that had a Wall Street flare to it. I found myself studying multiple P&L’s where EBITDA kept popping up….