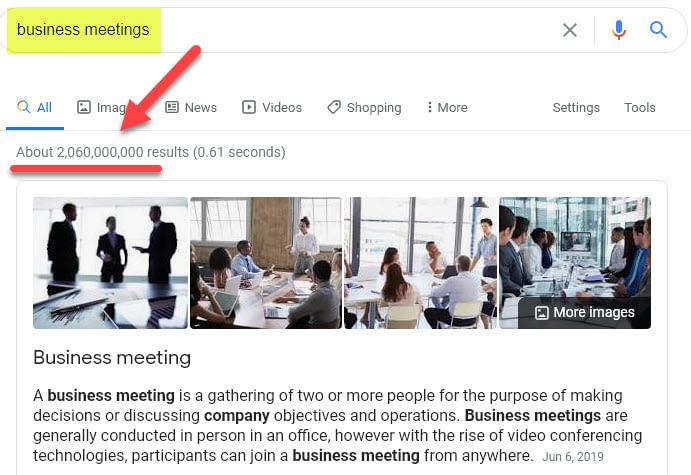 Maybe I should rephrase that. I love really short meetings. Really.

A few days ago, I was meeting with a CEO, and he was headed to the weekly operations meeting. He invited me to tag along. Great, I thought. This will be long and probably boring. We’ll get off on a few tangents. One or two issues will be beaten to death and then some more. At least one person will have to be muzzled as he or she has an opinion on everything. Did I mention the lukewarm coffee? Oh, those issues that were beaten to death? Still alive and breathing.

Holy cow! Instead, that was the best meeting I had attended in a long time. The Director of Operations guided the discussion. We hit on four relevant issues. While the CEO was in the meeting, he mainly listened. We were wrapped up in 10 minutes. And, the coffee wasn’t that bad. Really.

Full Disclosure–I Can Live Without Most Meetings

In my first management position, I inherited a team that met every Tuesday morning. The agenda was pretty simple. The four supervisors each gave a what’s-up in their areas in the Accounting and Finance department. This meeting always took about two hours. I thought I was going to die (of boredom).

After three weeks of this drudgery, I made a small change. I brought an agenda. My first agenda-based meeting lasted between 15 and 20 minutes. My supervisors were concerned at first. It was different. How were the other supervisors going to know what each other was doing? But we got through these issues, and my team came around. They ultimately liked the short and focused meetings.

In my third controllership position in which I was also a CFO, I probably went too far in my disdain for meetings. I cut many of them out that I had control over. I still maintained an open door policy, and I held certain one-on-one standing meetings weekly. I just punted on the bigger-group meetings. Probably not a good idea, and I’ll explain why in a bit.

I share this because I am biased. It’s not that I don’t like meetings. I dislike not getting real work done.

Yes, Meetings Are Inevitable in Any Business, But …

By all means, meetings are critical. Or maybe I should clarify that most meetings are important. Even in a world where we receive a hundred e-mails a day, we have to have them.

We need meetings to keep team members in the know, to keep them motivated, to keep them updated, to solve problems collectively. I could go on. But what happens when our very best managers are spending upwards to 20 hours a week or more in meetings. Is that productive? Is that really the best use of time?

I recently asked five senior managers at lunch their opinions about meetings. I had to calm them down. Really.

I asked them if every meeting of theirs was cut in half, would they achieve the same results. Every manager said yes. But, I already knew that. I just wanted to hear them say that.

I am no meeting expert, and you already know my bias. Plus, just Google business meetings, and you will find nearly four million links. So I’m sure you’ll find a few decent tips elsewhere. But let me still offer a few suggestions on your meetings from my perspective.

Well, I’m tapped out. I need a drink, and I’m headed to a meeting. Really.

I first wrote this post in 2014. Google returned 3.9 search results on the term ‘business meetings’ while that total jumped to 2 billion at the beginning of 2021. My point is still valid in a Zoom-dominated era of meetings.

After the turn of the century, I moved my family to rural Howard County, Missouri to be closer to aging parents so we could better help and serve them. Shortly thereafter,…

I have probably discussed this elsewhere, but one of the best interviews I’ve ever listened to on exit planning was between Dr. Jeffrey Cornwall and Paula Lovell, Founder and CEO of…